The pharma giant’s drug was subsequently granted emergency use authorization by the FDA (Food and Drug Administration). Around 1 million vials of the drugs are planned to be issued to various hospitals from Monday, according to US Vice President Mike Pence.

Performance of US Indices

US indices closed trading on Friday on a downbeat note, after recording their best monthly performance in decades. The Dow Jones Industrial Average lost more than 622 points to close at 23,724 on Friday, booking a weekly decline of 0.2%. The S&P 500 index closed lower by 2.8% at 2,831, down 0.2% for the week. The Nasdaq Composite Index dived 3.2% on Friday, to book a weekly decline of 0.3%.

Top US Stocks of the Week

Shares of Facebook, Inc. (NASDAQ: FB) climbed more than 5% on Thursday after the company posted solid revenues for its first quarter. Although the company’s earnings were disappointing, investors took solace in the 11% spike in daily active users during the quarter.  The social media company’s stock recorded a weekly rise of 6.4%.

The bulls were active last week, sending the major European indices on an uptrend. Despite closing lower on Friday, the German DAX 30 led the markets to close the week higher by more than 5%. The French CAC 40 climbed around 4.1% last week, while Europe’s Stoxx 600 rose 3.2%.

Top European Stocks of the Week

Deutsche Bank’s shares jumped over 10% on Monday, after the bank said it expects to report strong results for the first quarter. The Frankfurt, Germany-based lender saw its stock surging almost 23% on the week.

Shares of Barclays PLC posted healthy gains on Wednesday, after the London-headquartered bank released in-line earnings for the first quarter, with sales exceeding analyst views.  Barclays’ stock closed the week higher by around 16%.

The US dollar slid versus the Japanese yen during the week, moving below the ¥107 mark. The Euro surged strongly against the greenback last week, rising towards the $1.10 level backed by the upbeat performance of the European stock markets.

Bitcoin price rose during the week, ahead of this week’s halving of the largest cryptocurrency. This will be the third halving of Bitcoin, which has gained over 40% year to date. Investors are keenly awaiting the halving, which will cut the cryptocurrency’s supply by 50%, and be hugely beneficial for hodlers. Meanwhile, the upcoming launch of ETH2.0 took Ethereum prices higher last week. 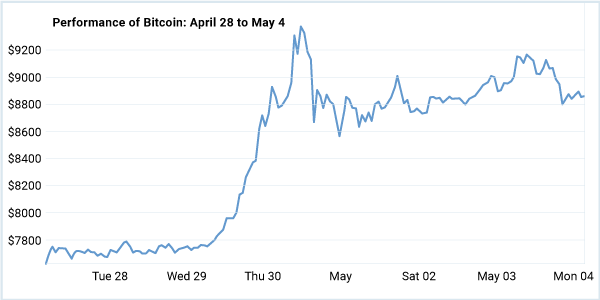 Bitcoin price surged last week to break the $9,000 barrier for the first time since the end of February. Ethereum, which struggled initially in the week, climbed 4% on Friday to reach the $215 level.