What Took Oil Prices from $67 to Below Zero in Just Three Months?

Wild market swings have become the new normal amid the coronavirus outbreak. The steep decline in oil prices came as no surprise. But no one could have imagined even a few weeks back that oil prices would plummet to negative territory. Shockingly, for the first time in history, West Texas Intermediate (WTI) crude oil nosedived to a jaw-dropping -$37.63 per barrel on April 20. What that literally means is “Hey, I’ll give you $37.63 for taking this barrel of oil from me”! It’s unfathomable. Yet, it happened.

The reason oil prices went into negative territory is that the US had so much unused oil that it ran short of storage space. But what led to this unprecedented event? Let’s take a look.

Nothing to Fuel Demand

Oil is essential to grease the wheels of the global economy. But what if the wheels stop moving? That’s exactly what happened with the coronavirus outbreak. Most countries across the globe imposed travel restrictions.

With travel restrictions, commercial aircrafts were grounded and road traffic significantly reduced. Billions of gallons of oil are consumed in the form of petrochemicals for manufacturing cosmetics, furniture, electronics, appliances and a host of other products. As factories pulled down their shutters, this demand slowly fizzled too. Also, factory closures disrupted supply chains and the largest trucks came to a grinding halt. With stay-at-home orders, even the occasional cars heading to office become a rare sight.

As the coronavirus outbreak yanked at the reins of the global economy, forcing it to abruptly come to a near standstill, demand for oil plummeted.

Holding Oil Majors Over a Barrel

What do companies typically do when demand contracts? Don’t have to be an economics professor to know that supply needs to be reduced. Oddly, that didn’t seem so obvious to oil producing majors. Rather than reduce supply, they threatened to increase it. But, we’re getting ahead of ourselves.

Reducing oil production takes some planning, mainly because this commodity is sold for future consumption. So, while global oil demand dropped below 75 million barrels per day, supply continued at 90 million. That’s 15 million barrels of excess supply… per day! Soon oil majors were scrambling for storage space for the excess supply.

The oil majors held meetings to cut production but talks failed. The reasons are more political than economic.

Drilling Down to the Root Cause

OPEC+ (the Organization of Petroleum Exporting Countries and their allies) held several meetings to lower production. However, the two largest oil producers, Saudi Arabia and Russia, came to the table with different issues. On the one hand is Crown Prince Mohammed bin Salman, who wants to retain Saudi Arabia’s position as a world leader in oil production. He realises that the kingdom’s huge oil reserves could lose value, with rising concerns over climate change. Russia has its agenda of hurting the US oil industry.

Matters between these giants approached a breaking point, when Saudi Arabia suggested during the March 6 meeting that members collectively lower their production by 1 million barrels per day and Russia bear the most dramatic cut of 500,000 barrels per day. Of course, Russia didn’t agree, and talks failed. Saudi Arabia, which has been the uncrowned leader of the cartel, retaliated by unwittingly threatening to increase production and started a price war. 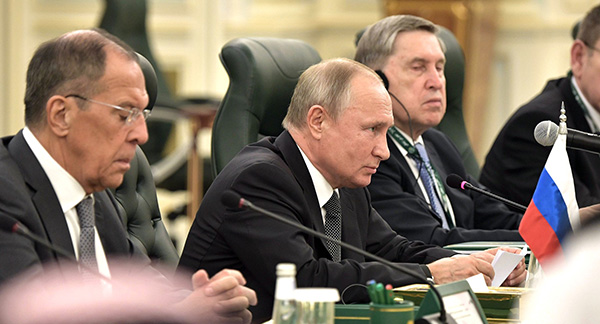 The US dynamics didn’t help and President Donald Trump’s comments (aka tweets) made matters worse. The OPEC produces 40% of world’s oil supply, which means it can act like a cartel to control oil prices. In recent years, however, the US has emerged as a major oil exporter, with increasing efforts to shift to renewable energy sources.

Although the OPEC+ members have their differences, the greatest problem perhaps is the strained relationship between the group and the United States. President Trump has simply made the relationship more volatile. 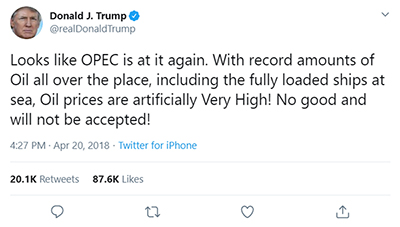 OPEC+ has now agreed to a historic production cut, bringing down supply by 9.7 million barrels per day starting from May 1 through end June, to provide some relief to the global oil market. The world’s top exporter, Saudi Arabia, is playing a good Samaritan, by beginning to cut oil production from around 12 million barrels per day to reach its agreed quota of 8.5 million.

The US President is still holding out, refusing to ask American companies to lower production. Although US oil production has declined, it’s only due to producers reducing investment and exploration and is not significant.

Although oil price has climbed out of negative territory and into the double digits, it has remained below the $20 mark. Even as economies ease lockdown restrictions and offices and factories reopen, demand is likely to remain soft this year. Meanwhile, global leaders need to put aside their differences and individual agendas to come together to stabilize the oil market.